Over the years, several BSchools in India have established and expanded their base for the welfare of students and academicians. But ahead of the rise of private institutions offering programmes like PGDM and MBA, an array of corporates is stepping up to collaborate with business schools for mutual benefits; mainly, getting access to a pool of resources and helping students bag a job at renowned organizations where the demand for their skills is higher and valued. Among them is IMI Bhubaneswar, which happens to be the country’s first corporate-sponsored BSchool. Since its commencement in 2011 till now, this institute has attained an immense reputation for housing some of the best faculty and class-apart infrastructure that strengthens the requirement of aspirants seeking uncompromised education and training. IMI B, being the one among best management institutes in India, has managed to strike up a relationship with leading brands like Adapt Investments, Amco Batteries, Apple Industri
1 comment
Read more 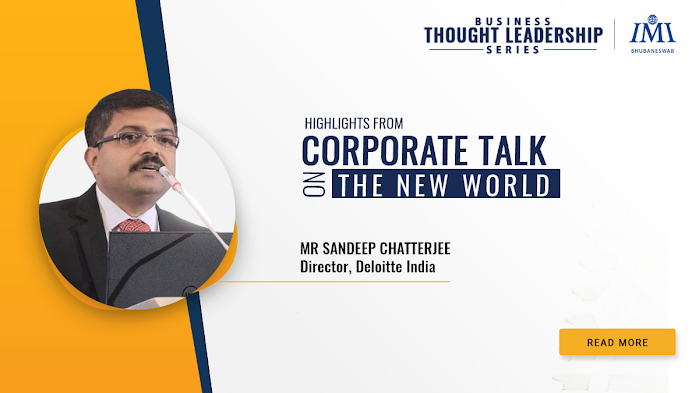 The Business Thought Leadership Series is the first opportunity for students to get insights into the corporate world through the experiences of leading experts. And this time the engaging Corporate Talk held on 22 nd June was conducted by none other than Mr Sandeep Chatterjee, Director, Deloitte India. 'The New World'  was the theme of his talk in keeping with present times. Right at the onset, Mr Chatterjee offered an overview of the current business climate and focused on topics including the general sentiment of consumer’s buying preference, retail environment, transportation and travel. He also offered a light of hope as he acquainted students with new opportunities that these times have presented us with. “This is not the first crisis that we have faced, and of course this is not the end. But every crisis offers an opportunity. We need to learn how to respond to the crisis. Organizations can learn to recover from it, and be more adaptable to the new normal,” said M
Post a Comment
Read more

Advantage IMI: Most powerful perks of a distinguished pool of faculty

How can faculty help students experience success factors – directed, connected, focused, engaged, nurtured, and valued – during their college enrollment? Hiring professors and faculty members with distinct and distinguished backgrounds mean going deeper than just their experiences, ethnic & cultural beliefs, and educational qualifications; it also means professional diversity. While it seems seamlessly logical to want to hire a faculty with experience related to the position, there’s no harm to consider experts with other majors. Realize that it’s not the educational qualification but rather knowledge that contributes to the growth of students. Most of the institutions, including some of the leading BSchools in country   do not have the best resources to update the skills of their students on the upgraded technologies and actual software that they would be working on in their respective fields. For instance, although you may want to hire someone with a business management deg
Post a Comment
Read more

Bhubaneswar re-explored: A land of opportunities and playground of new-age leaders

The ancient city of Bhubaneswar, sited in India’s eastern state of Odisha, has been ranked as the best destination housing over 2000 beautiful temples. However, with advancements, Bhubaneswar has slowly grown to become an important business centre, with manufacturing and IT as the fastest growing sectors in the city. Owing to the cultural shift taking place towards cosmopolitanism, more than 100 educational institutes have found their base in this city. Likewise, Bhubaneswar has been a witness to the mushrooming of numerous business schools and management institutes offering a range of courses like MBA and PGDM. This city is home to some of the top-ranking colleges that have received rave reviews and are industrially acclaimed. Leading the pack is the International Management Institute (IMI) that was set up in 1981. Other popular names include Xavier University (XUB), KIIT School of Management (KSOM), and Institute of Management and Information Science (IMIS). What makes IMI-B an i
Post a Comment
Read more

13 th April 1948- from the day of its inception, Bhubaneswar, the temple city, has come a long way in the field of education with a number of renowned institutions for all ages paving their way onto the city's map in recent years. The government of Odisha has committed to enacting policies that will help the state become the country's chosen educational hub. Bhubaneswar: Rapidly developing education system? Bhubaneswar has attracted people from all over the country with its rapid development. Many reputed multinational corporations (MNCs) hire a large number of entry-level workforces from Bhubaneswar. People from all over India started to migrate here, for the need of top-notch education for their children. A number of CBSE and ICSE affiliated schools, ranging from nursery to intermediate, have been created. Both primary and secondary education in the city is now reaching the levels of international standards. ●        Schools and Intermediate Colleges in Bhubanesw
Post a Comment
Read more

Bhubaneswar is the most developed of Odisha's cities. The city's vast human and natural resources, as well as its vast knowledge base, has been instrumental in the rise of the new city. Bhubaneswar along with Jamshedpur and Chandigarh were among independent India’s first well-planned and designed cities. Designed by German architect Otto Konigsberger in 1946, Bhubaneswar began building as a modern city while preserving the architectural marvels of ancient Kalinga. Fast-growing economy, and industries in Bhubaneswar: Bhubaneswar is one of the fast-developing, commercial and industrial hubs in Odisha and east India. Retail and small-scale manufacturing overshadowed the economy till the 1990s. Odisha's rich mineral resources have long been the backbone of the state's economy, which is dominated by government enterprises and private organizations such as Jindal, Vedanta, TATA, and others. The city has a long history of handicrafts, such as silver filigree work, embr
Post a Comment
Read more
More posts